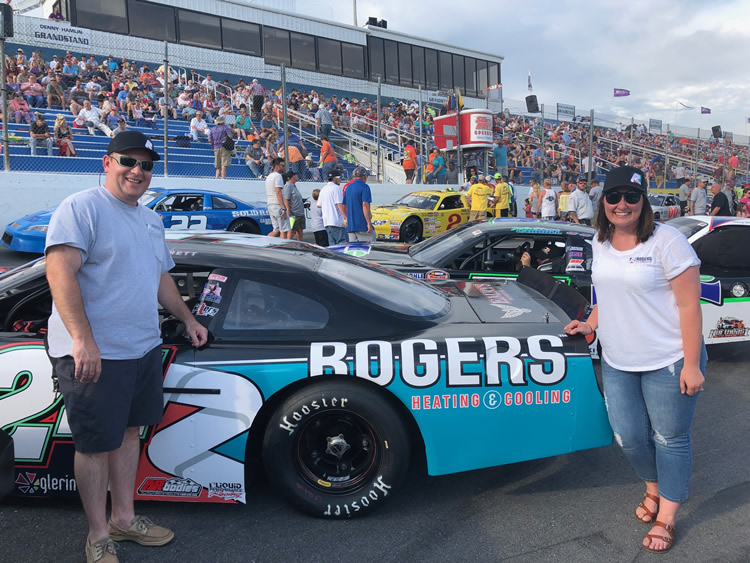 Rogers Heating & Cooling made their NASCAR debut June 29 on the hood of Colin Garrett’s #24 Sellers Racing Chevy at the Whelen Late Model 200, South Boston Speedway’s Fan Appreciation Night. Rogers brought heat to the track in the form of Garrett’s new car wrap and cool to the fans with the 250 fans and 250 koozies they handed out.

“The entire event at South Boston Speedway was fantastic and the turnout was great,” stated owner Joseph Rogers. “We’ve had customers calling and coming into the office all week stating they called because of the race sponsorship. They’re saying how much they appreciate us giving back to the race community and doing the race ticket giveaways last week that gave them the chance to win.”

Alyssa Rogers handles the company’s marketing and said “this has opened our eyes to a whole new world of marketing and we hope to be able to do it again in the future. We’re already seeing that it’s expanded our customer base and has been a great conversation starter all week.” To make the most of race day she planned an integrated marketing campaign leading up to the race, including newspaper ads, Facebook Live interviews with Colin, and ticket giveaways.

The sponsorship also provided an opportunity for company fun. Rogers does quarterly outings for employees to show appreciation for their hard work, and the race was their “Kickoff to Summer” event. The company rented the VIP Suite in Turn 1 for employees and their families and had 30 people cheering for Colin.

Derick Vicks, Service Leader, said “being at the race with the entire Rogers Heating & Cooling team and my son, Austin, was such a fun experience – it was neat to see the company’s logo going around the track.”

“It was fun to be at the race and was a more exciting experience to be able to cheer on a car with the logo of the company I work for – Colin did great!” added Becky Lloyd, Customer Service Leader.

Rogers Heating & Cooling also has something to remember the race by – the firesuit Colin raced in that day, branded with their logo and now showcased on display in the office.
When asked about their future NASCAR plans, Joseph Rogers said “we’re happy we chose Colin to be our driver for our first race sponsorship, and we hope to be able to sponsor him again in the future.”

Garrett added, “it’s always fun to bring in a new sponsor and show them that NASCAR isn’t just about a logo going around the track. It’s about building employee morale, connecting with the most loyal fanbase of all pro sports in the US, and actually seeing a return on your marketing investment. Rogers Heating & Cooling was great to work with, and I’m looking forward to running more races with them.”