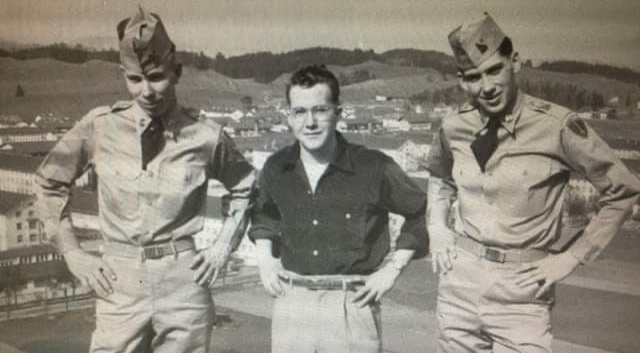 More than six decades after his grandfather raced his ‘49 Cadillac on I-94, Colin Garrett is set to take on Michigan International Speedway.

While Roy Kaywood and his brother, Roger, may have driven on a highway before it opened to the public in 1960, Garrett is taking a bit of a different route: racing on an oval track as the No. 26 driver for the NASCAR Xfinity Series.

Drag racing, however, was all the rage in Jackson during the ‘50s, and the Kaywoods had the car to beat. In fact, people would come from as far as Ohio to compete against their famous Cadillac.

Today, not only has Garrett inherited the racing gene, but he has continued to honor his family’s deep veteran ties through his 11/11 Veteran Project. Partnering with nonprofits The Rosie Network and Racing for Heroes, Colin works to expand access for suicide prevention programs and other veteran causes across the country.

But the most meaningful part of this upcoming race? Getting to pay tribute to his grandfather Roy, a disabled army veteran, by giving him a place of honor on the hood of his No. 26 Toyota Supra.

“It means a lot to have my Papa on the car for this race,” Garrett says. “He was one of the first ones to encourage my racing career, so I’m grateful I can offer even this small tribute to him for his service to our country.”

Roy Kaywood enlisted with his brother, Roger, and served in Germany during the Korean War. Their sister, Virginia, served as an army nurse during this time as well.

They were no strangers to hard work and serving their country. In fact, the Kaywood kids watched their dad during WWII when he started a machine shop in their garage making parts to help with the war effort.

Founded in 1941, Kaywood Products Corporation was a part of the Jackson business community until it was acquired by Textron in 1997.

Without a doubt, his love for cars and his country has been passed down through the generations. Roy’s grandson, Colin Garrett, carries on his legacy of speed on the NASCAR track, while Colin’s brothers Bryan and Aidan White serve in the U.S. Army.

Nowadays, Roy and his wife, Joan, split their time between Jackson and Danville, Virginia where their grandsons grew up.

And Colin’s Michigan roots run as deep as ever, since he is also the son of Ryan Garrett and Jill Kaywood Garrett, Stockbridge High School graduates (classes of ‘79 and ‘80 respectively).

To see Garrett in action, be sure to catch the NASCAR Xfinity New Holland 250 on August 21st at 3:30pm ET at Michigan International Speedway.

Sponsors on the No. 26 Toyota Supra for this race include The 11/11 Veteran Project, Springfield Distillery, Lisa Kipps-Brown’s “Disrupt Your Now,” accessiBe, and Hoby’s Collective.