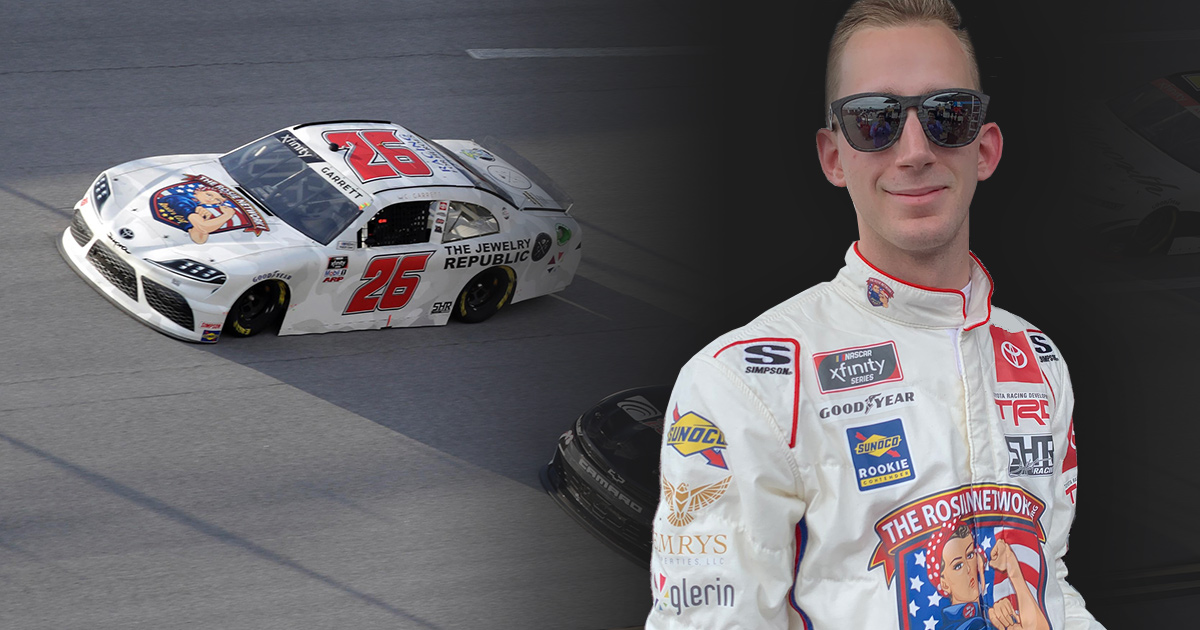 Colin Garrett is headed to Talladega Speedway! The 20-year-old driver will return to the NASCAR Xfinity Series in the No. 26 Toyota Supra with Sam Hunt Racing on April 24 for the Ag-Pro 300.

Sponsored by Veteran Owned businesses, Garrett’s car will also have a place of honor for the late RADM Tom Brown II (SEAL) who will be riding shotgun in spirit on the passenger side of the car.

Garrett has been with Sam Hunt Racing since the team began, and he was the pilot of the No. 18 NASCAR K&N Pro Series entry for SHR in 2018 prior to the team moving to the Xfinity Series in 2019.

When asked how he would describe working with a newer team like SHR, Colin said, “I’ve known Sam since 2016, and we started working together at the latter end of 2017. This will be my 4th racing season with him, so to me it doesn’t feel like we’re a newer team. We ran our first Xfinity race together in 2019, and we ran really well. I feel like that showed everyone what the future of this team is. SHR has proven that at every race since then, and I believe it will only get better with the people and equipment that have been acquired since then.”

Colin has been working in the SHR shop this year, so he has seen the mechanical side of things firsthand as they’ve prepared the cars for the track each week.

The South Boston, Virginia native and former South Boston Speedway track champion in the Limited Late Model division shares, “Our plan is to keep the car in one piece and hopefully land in Victory Lane…I will have Chris Lambert on the tower. He’s not exactly a novice when it comes to plate tracks, so that can only add to the hope I have going into it.”

Colin has been an avid supporter of veteran causes, and the 11.11 Veteran Project will even be featured on the hood for this race – Colin’s mission comprised of companies and individuals supporting nonprofits such as The Rosie Network and Racing for Heroes who will also be on the car to promote their free services to help combat veteran suicide.

The Ag-Pro 300 at Talladega Superspeedway will be televised on FOX at 4:00pm ET on Saturday, April 24.

If you’d like to talk about how your company or organization can partner Colin, contact us through his Partnership page or email [email protected].