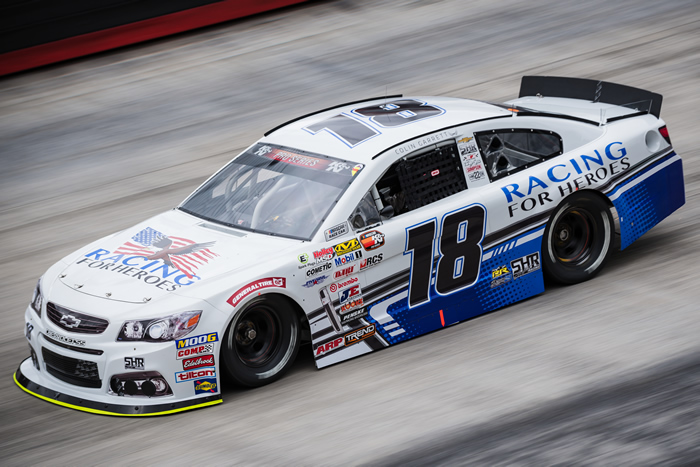 Colin Garrett and Sam Hunt Racing debuted the #18 Racing For Heroes Chevy in Saturday’s NASCAR K&N Pro Series-East Zombie Auto 150 at Bristol Motor Speedway, finishing with a strong P7. He started 12th in the lineup and completed all laps of the 150-lap event.

This was the second K&N East race of the 2019 season, and the second Top 10 finish in a row for Garrett and the #18. After the Bristol race, he’s currently fourth in the 2019 K&N East point standings.

Mike Evock, founder of Racing For Heroes, and three of his RFH group joined the team for the race. Photo: Sam Hunt, team owner, is 3rd from left; Mike Evock is far right.

From catchfence.com: “It appears that their technical alliance with Rette Jones Racing paid off for Sam Hunt Racing in Thunder Valley. The popular driver from Virginia didn’t qualify strong on Friday night and didn’t have the best No. 18 Toyota Camry during the early stages of the race – but as the race laid out, Garrett’s car came to life and the driver maneuvered back-to-back top-10 finishes to open the 2019 season.”