Coming Home To SoBo For Doubleheader Duty on Nov. 3 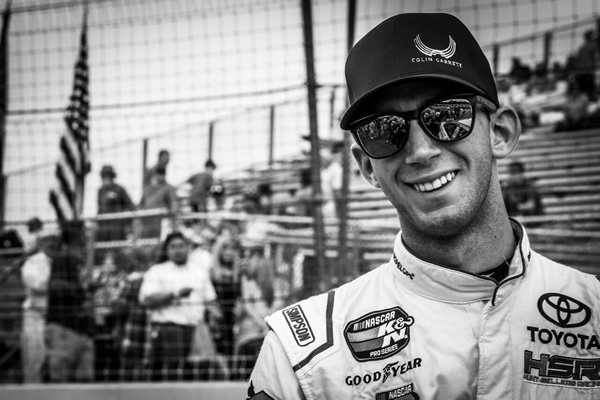 Colin Garrett loved his days on the road this season as a rookie in the NASCAR K&N East Series, but he’s happy to be coming home on November 3, even if it means a little extra work.

Garrett will compete in both the Late Model Stock and the Super Late Model portions of the autosbynelson.com 250 CARS Response Energy Tour race at South Boston Speedway, which will take the green flag at 3 p.m. on November 3.

This time a year ago Garrett was celebrating South Boston’s Limited Sportsman championship, but early in 2018 he made the big jump to the K&N Series. Even though he missed the first race of the season, Garrett finished 10th in the final K&N East standings with one top-five and five top-10 finishes. The lone top five was a third in one of the twin 100-lappers at South Boston.

“It was a frustrating year, but a learning year,” said the 2017 Halifax High School graduate. “We were really fortunate to have the opportunity with Hunt-Sellers Racing. We were going to a lot of big tracks and learning the sensation of speed, learning how to manipulate the air. We got to go to all the tracks this year, so if we go back, I’ll be better.”

Garrett lives about 15 minutes from South Boston Speedway, and even though he’s toured the country racing this summer he may be most excited about that short ride from home next weekend.

“It’s kind of cool being at a different track each week, to get to drive different tracks and meet a lot of people. But it’s exciting to come back to my home track, to the track where I won my first race and where I won a championship,” said Garrett.

Garrett will be driving a Sellers Racing entry in the 125-lap Late Model race on November 3 and a Super Late Model prepared by Jamie Yelton and his Fathead Racing team. It is the same Super Late Model that current Cup regular Bubba Wallace won a race with at Bristol Motor Speedway in 2017.

Garrett tested the car at South Boston a week ago but the AutosbyNelson 250 will be his first Super Late Model start.

“In the K&N cars I got used to a lot of power with a big, heavy car, but getting into a light car with a lot of power, there’s a big difference,” said Garrett, who is sponsored by Propel GPS and EMRYS Properties. “The power isn’t a big deal; it’s how quickly everything happens. I’ve got to work on slowing my hands down.
“The K&N and Late Model cars, you have to whip them around they are so heavy, but the supers are so light and so specific, you can’t do that. It’s going to be interesting going back and forth. I’m going to have to adjust for sure.”

Garrett will be driving the same car in the Late Model portion of the event that he drove to a fifth-place finish in the season-end doubleheader at South Boston, one of only a handful of Late Model starts he had in 2018.

“I ended up wrecking it in the second race that night, but we’ve got it back together good,” said Garrett. “We were running second in the first race, overheated and I had to come in and wound up fifth. It’s going to be cooler for this race and the track is going to be grippier. It’ll fit my driving style a little better so I can attack a little more.”

The twin 125-lap races will determine the CARS Tour championship in each division. Gates open at noon with the Super Late Model race set to begin at 3 p.m. followed by the Late Model Stock race.

Adult tickets are $10 in advance until 5 p.m. on Friday, November 2 and $15 the day of the race. Children age 12 and under will be admitted free with a paying adult. Advance tickets may be purchased by calling 877.440.1540 or stopping by the track.