Garrett drives for competitor in 2nd race of SoBo Doubleheader 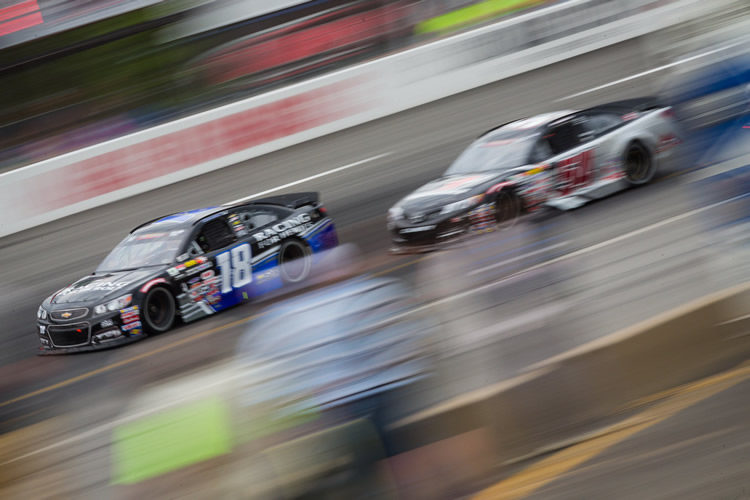 Stands in for competitor in Race No. 2 and moves him up 3 places in K&N standings.

Colin finished P6 in Race No. 1 of the WhosYourDriver.org Twin 100s at South Boston Speedway on May 4. Just as Race 2 was being postponed after Lap 20 due to thunderstorms, his #18 Racing For Heroes Chevy was wrecked by Hailie Deegan, knocking his car out of the race that was completed Sunday.

NBCSN interview before Race 1 with Colin at 7:17 “Next Generation.”

His competitor, Ruben Garcia Jr., had another race Sunday, so Colin agreed to drive his car for the remainder of the race.

Starting at P11 for Garcia, Garrett drove his Rev Racing car to a P7 finish, moving Garcia from P12 to P9 in the K&N East point standings. Garcia got the points for the fifth-place finish as the driver that starts the car gets credit for the point

Garrett’s official finish for his own wrecked car in Race 2 was 14. He came into SoBo 4th in the K&N East points and leaves in 8th, ironically helping his competitor gain ground on him in the points standings.

“It was weird to start a race in my own car and finish the race in somebody else’s car,” Garrett said. “It was pretty cool. Those Rev Racing guys put together a good piece. Did the best I could with it, ran my own race and just tried to bring it home in one piece for those guys.”

“I was glad to come out here and kind of give Ruben some points,” Garrett joked. “Tried to not do too well, still gotta race him the rest of the year … funny story, I was sitting in the hauler about 30 seconds before he came in and they were talking about how he may need a relief driver. And I was like, ‘Nah, I’m not doing that.’ Then he walked in and was like, ‘Will you do it?’ And I was like, ‘Yeah, I’ll do it.’ I was happy to do it for him.”