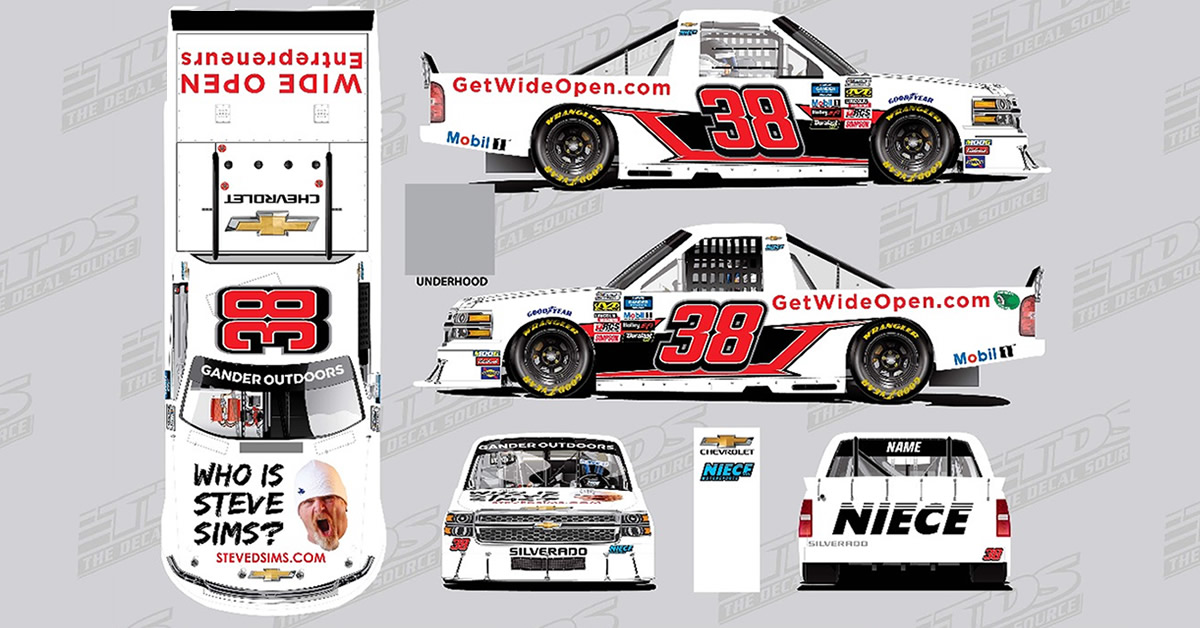 “Like any entrepreneur, you’ve got to trust your instincts and step out of your comfort zone… Colin Garrett has never set foot in a NASCAR truck, yet on Friday he will practice for one hour, qualify and then race. To reach his goal he’s got to go wide open, just like every entrepreneur with a dream. Watch Colin Friday night, and then come get Wide Open with Steve Sims in October in South Boston VA.”

Steve Sims, author of Bluefishing: The Art of Making Things Happen,” is headlining Wide Open Entrepreneurs, a conference being presented by Colin Garrett Racing, Glerin Business Resources, and Propel GPS on October 24  to help entrepreneurs realize their dreams. The event will benefit Racing For Heroes’ fight against Veterans suicide.

Colin Garrett on Racing at Las Vegas: “I’m grateful to Al Niece and everyone at Niece Motorsports for this opportunity and am really looking forward to getting on track in the No. 38 Wide Open Entrepreneurs Chevrolet,” said Garrett. “I know we will have a solid truck, so it’s just a matter of learning as much as we can in practice and applying that to qualifying and the race.”

About Garrett: Unlike most race car drivers who have been racing karts since early childhood, Garrett did not begin racing until he was 14 years old.  His very first year of racing was 2015, when he ran a Pure Stock car and finished 8th in points at South Boston Speedway.

In his second season of racing in 2016, Garrett successfully transitioned to a NASCAR Whelen All-American Series Limited Late Model Stock Car and finished 4th in points at South Boston Speedway.

In 2018, Garrett raced in both the K&N Pro Series East and the Late Model Division.

The 2019 season has seen Garrett compete in the K&N Pro Series, in addition to making his first NASCAR XFINITY Series start at Richmond Raceway.

On the Truck: The No. 38 Chevrolet Silverado will carry the Wide Open Entrepreneurs colors this week at Las Vegas Motor Speedway.